HER RIGHT FOOT by Dave Eggers

Today’s Perfect Picture Book Friday pick is  HER RIGHT FOOT by Dave Eggers. I am often asked, “Where are you from?” Sometimes I respond, “If you tell me your immigrant story, I will tell you mine.”

HER RIGHT FOOT is an important reminder that the majority of Americans are descendants of emigrants and immigrants. Maybe your ancestors were part of the early British-American colonies or the French and Spanish colonies as mine were. Maybe they came via the Gulf of Mexico as my great-grandfather did during the 19th century, or were greeted by the Statue of Liberty in the Atlantic upon arrival from a distant land. Regardless of your family origin, this story reminds us of the early motto of the United States, E pluribus unum, “out of many, one”.

Brief Synopsis:  Dave Eggers tells the story behind the making of the Statue of Liberty. As the story progresses, readers learn the history behind this gift from France and most importantly, that it represents how the United States is a country that embraces and welcomes emigrants and immigrants.

Opening pages: “You have likely heard of a place called France.

You may have also heard of something called the Statue of Liberty.

Did you know that the Statue of Liberty comes from France?

This is true. This is a factual book.”

Why I like this book: Written in second person, the narrator addresses readers directly. The author uses a playful but instructive approach to introducing kids to fun facts about the design, construction and transportation of the Statue of Liberty. It artfully teaches the fact that our country is populated with people from many different countries and cultures from around the world and ties in the symbolism of Lady Liberty as a beacon that welcomes everyone to the United States.

Today’s Perfect Picture Book Friday pick is Anywhere Farm. It’s spring! And we know what that brings. Time to plant. Do you know what food you’ll grow? 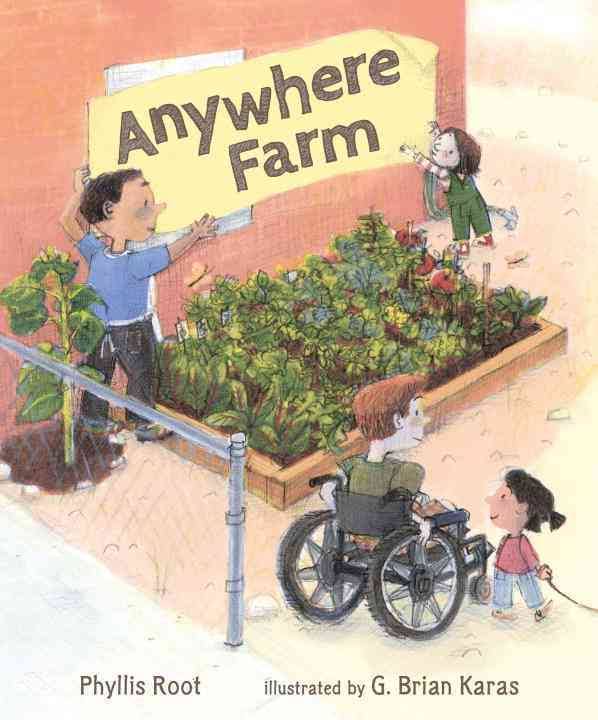 Brief Synopsis:  This book introduces young children to the idea of community supported agricultural more than farming and shows how urban areas are used to grow food.  [spacer height=”10px”]

Opening pages: “For an anywhere farm, here’s all you need:

Why I like this book:  We joined a local CSA (Community Supported Agriculture), last year. The produce we get is abundant and so tasty. Anywhere Farm is an informational book. Kids learn it’s not hard to grow food, you need soil, sun, water, and a seed. An empty lot surrounded by buildings is transformed into a community garden. Food can be grown anywhere and in anything. Kale in  pail. Corn in a horn.

Children and adults work together. They re-purpose items found in the garbage to use as pots. Children also learn about insects and animals found in an urban garden. And when there’s plenty of food, the neighbors start a farmer’s market to sell to other neighbors.

The rhythm and rhyme is playful and the illustrations inclusive. A delightful book for young children to learn about growing food in an urban environment through a community effort.