A SONG FOR GWENDOLYN BROOKS by Alice Faye Duncan

A SONG FOR GWENDOLYN BROOKS 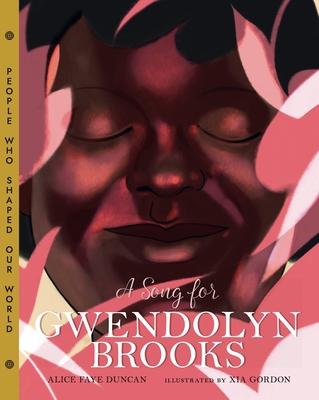 The book is part of the “People Who Shaped Our World” series. Alice Faye Duncan captured the life and work of Brooks, beginning in 1925 at age eight, ending in 1950, the year she became the first African-American to win the Pulitzer Prize for Poetry.

Duncan writes in lyrical text and shows observations informed the poet’s writing, even from an early age.

The author also gives examples of the kinds of struggles Brooks faced as a young, gifted writer as well as the support she received from her family. Brooks struggled with her confidence and her words. A teacher once accused Brooks of plagiarism so her mother had the young poet write a poem in front of her. As a teen when others were looking for work, Gwendolyn’s parents supported her dream and allowed her to “sit and think”. And from all her years of hard work, an adult Brooks realizes her dream and became a professional writer.

Back matter includes an author’s note, timeline, suggested readings by Gwendolyn Brooks and bibliography to learn more about one of America’s most influential writers.

I read the ARC for this review; the book release date is January 1, 2019. This book would be a great addition to the home, school, and library.

Martina & Chrissie: The Greatest Rivalry in the History or Sports

This Saturday is the kick-off of the Western & Southern Open Tennis Tournament here in Cincinnati, an exciting week for tennis fans. As a player, I enjoy keeping up with the pros and watching professional tennis. Some of the most thrilling matches in women’s tennis happened between Martina Navratilova and Chris Evert. This dual biography tells their story.

Brief Synopsis: Two professional female tennis players, Chris Evert from America and Martina Navratilova from Czechoslovakia, had very different upbringings and very different approaches to the game. But both shared the same goal – to be the best in the world.

Why I like this book:  Martina Navratilova and Chris Evert were two talented, hard-working athletes who competed for the #1 ranking in women’s tennis . As the top female  players on the tour in the 1970’s and 80’s they were often fierce opponents. Martina & Chrissie were also friends. These two talented hard-working athletes competed  for fifteen years. Martina and Chrissie met 80 times on the court – 60 of their matches were in tournament finals!

The two best players in the world battled tournament after tournament. One time Martina beat Chrissie, another time Chrissie beat Martina. When Martina started losing often to Chrissie, she decided to train harder. The training paid off and Martina started winning their matches.

Martina beat Chrissie 13 times in a row in tournament finals! But Chrissie never gave up. At one tournament when everyone thought Chrissie would lose, she fought back and won. Chrissie and Martina made each other better players. Their friendship endured the greatest rivalry in the history of sports. And both won the hearts of tennis fans worldwide.

She Persisted by Chelsea Clinton

When Senator Elizabeth Warren (D-MA) voiced her objections about the nomination of Jeff Sessions for US Attorney General during his confirmation hearing on February 7, 2017, she was silenced. Senate Majority Leader Mitch McConnell (R-KY) interrupted Senator Warren as she read from the letter written in 1986 by civil rights leader Coretta Scott King. That letter helped prevent the confirmation of Jeff Sessions as a federal judge for his home state of Alabama. McConnell accused Warren of making statements that impugn the character of Sessions which he determined was against Senate rules. [spacer height=”10px”]

The senator presiding over the hearing advised Warren that she was out of order under Senate Procedural Rule 19. “I’m reading a letter from Coretta Scott King to the Judiciary Committee from 1986 that was admitted into the record,” Senator Warren argued. “I’m simply reading what she wrote about what the nomination of Jeff Sessions to be a federal court judge meant and what it would mean in history for her.” [spacer height=”10px”]

Senator McConnell asked for a vote. After a 49-43 vote split across party lines, Senator Warren was not allowed to finish nor speak again. Instead, she continued reading the letter outside the door of the Senate floor. [spacer height=”10px”]

Defending his actions, Mitch McConnell later explained, “She was warned. She was given an explanation. Nevertheless, she persisted.”  [spacer height=”10px”]

Inspired by that event, Chelsea Clinton wrote this book and featured thirteen other women in America who also faced opposition and or adversity but succeeded because they persisted. [spacer height=”10px”]

Brief Synopsis:  In She Persisted, Chelsea Clinton introduces young readers to thirteen American women throughout history who, despite resistance from others or society, made positive contributions to our nation because of their persistence. [spacer height=”10px”]

Opening pages: “Sometimes being a girl isn’t easy. At some point, someone probably will tell you no, will tell you to be quiet and may even tell you your dreams are impossible. Don’t listen to them. These thirteen American women certainly did not take no for an answer. They persisted.” [spacer height=”10px”]

Why I like this book: She Persisted is an inspirational tribute to thirteen women whose contributions to our nation deserve recognition. Some of the women featured are well known and others are not. The colorful illustrations by Alexandra Boiger include a diverse cast of characters, girls and boys, that reflect our nation’s multicultural population. [spacer height=”10px”]

Perseverance, persistence, fairness, and dreaming big are common themes in children’s books. I enjoyed the inclusion of women in a book that also teaches US history. As a non-fiction book, there are endless opportunities for educational use. Students could conduct more in-depth study of each character, or research other lesser known female figures who have also helped shape our nation. The adults in this book are role models children should know about and look up to. The author includes a quote that explains why every child, especially girls, should read this picture book, “You can’t be what you can’t see.” -Astronaut Sally Ride [spacer height=”10px”]

What a fun perfect picture book pair about little girls who love to dress-up. But looking pretty is only one part.

Mary Had a Little Glam by Tammi Sauer (Author)

Mary is a bit of a fashionista but she won’t let her goals interfere with her fun! The ending is delightful.

Do all girls dress like princesses? Not this one. She dresses like famous female role models. [spacer height=”10px”]

A Perfect Picture Book Pair showcases two books with universal themes, but one must include a diverse setting, or life experience,  or main character. My goal is to support books in the market that helps contribute to diversity in children’s literature. [spacer height=”10px”]

Mark Twain said, “Travel is fatal to prejudice, bigotry, and narrow-mindedness…” I believe reading is too! [spacer height=”10px”]

Kids love to see their reflections in books. Join me and #ReadYourWorld!

Anyone celebrating Women’s History Month should take a look at the blog post here from Kid World Citizen. It’s an international celebration of women around the world! Link your titles to her blog.

There are so many wonderful children’s books, including picture book biographies about women and the contributions they have made to our nation and the world. This list happens to feature female scientists.

When I think my mother was born the same year women gained the right to vote in the United States, I really do think, “We’ve come a long way baby!”